By 1873 the third courthouse had become so dilapidated it was viewed as being unsafe. Judge James Kenney ordered that court proceedings should be temporarily moved to the Federal Court-house.

This Federal Court building was the former Northern Methodist Church building that had been built on the hillside on south side of West Market Street just beyond the railroad tracks when the Methodists split into Northern and Southern branches. Following the War they reunited in the church on German [Liberty] Street. 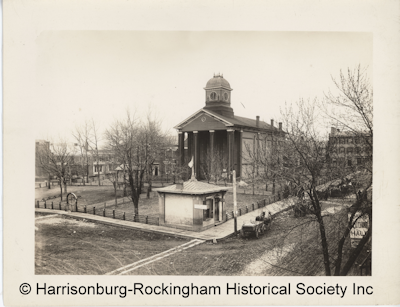 Early in 1874, Judge Charles T. O’Ferrell, who had replaced Judge Kenney, concluded that the courthouse was unsafe and needed replacement. Bids were quickly gathered, and the job was awarded to the construction firm of Holmes and Rust of Charles Town, West Virginia.
This fourth courthouse, also of brick, cost $11,450.

By March 1896, slightly less than 20 years after its construction, the fourth courthouse was in need of replacement. The Clerk’s Office was moved temporarily to the town council building on the west side of Court Square and other offices were moved to nearby buildings. Court sessions were held in the new Federal Courthouse that had been erected at the corner of North Main and Elizabeth streets. 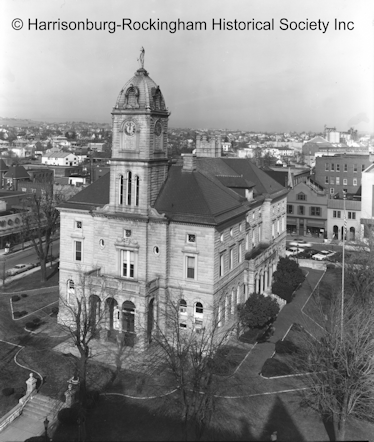 Austin Loewner, who was born in 1906, painted a series of pictures of early Harrisonburg. He also wrote down some of his memories about the city from the first quarter of the twentieth century. The first paved walks after the boardwalks were removed were paved with yellow bricks or concrete blocks. The streets were not properly paved until Harrisonburg became a city of the second class in 1916, the same time city schools separated from the Rockingham County School system. Before this, crushed stone was spread on the streets, but in rainy weather mud would seep up through the top layer of the gravel. The crushed stone was pulverized by hand. A pile of the stone would be dumped off a wagon at various places in the middle of a street. Workers would sit on the pile and use their napping hammers to break the stone into smaller pieces that would be scattered around the nearby section of street.